skip to main | skip to sidebar

On our way again and what a beautiful place to be paddling in. We went past Kaiteriteri, Sandy Bay, Torrent Bay. All these lovely bays. Melz had a great play with the baby seals at Tonga Island and the NWester didn't kick in till about 11 a.m. We spent much too long at the Cafe in Araroa, but the chicken wraps and the mocchacino were very good. Last time we had been in this area, we had missed the Cafe, so we were determined to find it this time. We paddled on past Totarunui and around Separation Point. We are sharing the Whariwharangi Hut with 15 others and we can look out and see our next days challenge, Farewell Spit. West Coast here we come.
Posted by Melanie & Max Grant at 10:35 PM No comments:

We spent an enjoyable time at Cable Bay and the Camp Caretaker, Phil Thompson, was a mine of information about the West Coast, as he had previously flown planes in the area. We left about 8.30 a.m. with a slight NE breeze at our back and headed for Stephens Bay. We saw a Navel Frigate go out of Port Nelson and later radioed up two large ships, also leaving Nelson, to let them know we were there. They had already spotted us. On a brilliant day, we made our way through the huge mussel farms out in the bay and after 6hrs we paddled into Stephens Bay on a very flat sea. Tonight we have the luxury of staying in our family bach right by the beach. As we arrived at 2.30 p.m., we've had the time to do the laundry, take a shower and just sit and admire the fabulous view (this is Margaret's favourite place). We've also eaten the apple shortcake left for us by mother-in-law, Mary and brother and sister-in-law Ron and Rae, for which we would like to thank them for and we're about to enjoy the steak and onions. It's good to be at the bach!!!
Posted by Melanie & Max Grant at 7:03 PM 1 comment:

We left our campsite on a cold and breezy morning but it soon improved to a beautiful day. We passed Croisilles Harbour paddling into a stiff head wind. A fairly uneventful day with everything going smoothly. Our stopover for the night is Cable Bay Camp ground, where we were shouted icecreams. We've had dessert, I'm now off for a shower.
Posted by Melanie & Max Grant at 9:04 PM No comments:

Not a Lot of Progress

Through French Pass at just after full tide. Not very nice conditions at all. Tried to paddle on to Okiwi Bay but had to turn back to shelter in Little Waikawa Bay. Had gormet lunch of mussels and set up a cosy campsite. Later tried to round to Okuri Bay but no chance in this weather. Off for a walk again. Forecast for tomorrow looks promising.
Posted by Melanie & Max Grant at 8:44 PM No comments:

We woke to a big rough sea and nasty wind so went for a good long walk. We set of for French Pass at 1 p.m. It was quite rough near Cape Jackson but the wind died and we had a good current to help us on our way. The southeasterly arrived and blew us along and we checked out the caves at Cape Lambert. A seal became caught between my kayak and the cliff and jumped right over the kayak in its bid for freedom. We stopped at Alligator Head for a late lunch, prepared by Mel, where a cheeky weka stole one of my sunpaws. I will need to use lots of sunscreen to stop that hand from getting sunburnt. We were really happy to arrive at French Pass at 9 p.m., a very successful day after such a late start. We have picked up a good forecast on CH22, so hope to paddle through the pass tomorrow morning. We are settled in the DOC campground, dry weather and no wind!!
Posted by Melanie & Max Grant at 1:16 AM No comments:

Back on the Water

We have had a break of nearly four weeks and we are certainly ready to continue our journey to Jacksons Bay. This morning we arrived in Picton on the early Bluebridge sailing and were met by our good friend Stuart Hart, who waved us on our way as dawn broke. Had a really good paddle in nice sunny conditions up Queen Charlotte Sound heading for Cape Jackson. We stopped off in Ships Cove for a lunch break and to view the Captain Cook monument. We had made contact over the past week with Ron and Gerry Marriott of Cape Jackson Wilderness Park and were hoping to call into their marina for a visit. After a quick chat with the Marriotts we decided that conditions were still good enough to attempt rounding the cape. They had also offered us the use of their hutt in Port Gore. We made good time in conditions that were getting rougher with white caps, but successfully rounded Cape Jackson by late afternoon. We are nicely settled in this beautiful hut. A very big thankyou to the Marriotts.
Posted by Melanie & Max Grant at 8:41 PM No comments:
Labels: Cape Jackson

Preparing for our final leg. 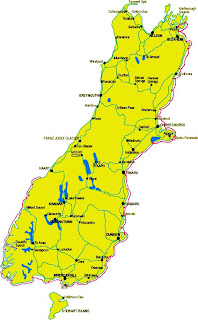 We're getting ready for the last stage, 830kms from Picton to Jackson Bay, Haast. So far we have completed 1670kms of our 2,500km journey around the South Island. We plan to start off from Picton on 26th of March and finish about 16th April. The map insert shows how much of our trip we have completed so far.
Posted by Melanie & Max Grant at 7:08 AM No comments:
Labels: Our progress so far.
Newer Posts Older Posts Home
Subscribe to: Posts (Atom)